Goooooood morning Vietnam…USA actually. It has been another huge day. Actually that is really what Contiki is. Early mornings, late nights with so much awesome in between. We stared our morning bright and early with a 4:30AM wake up. Hated my life at this moment. Then I realised that I was in the holiday of a lifetime so it got good pretty quickly. The reason that we woke up so early is that we had a hot air balloon sunrise flight over Albuquerque. 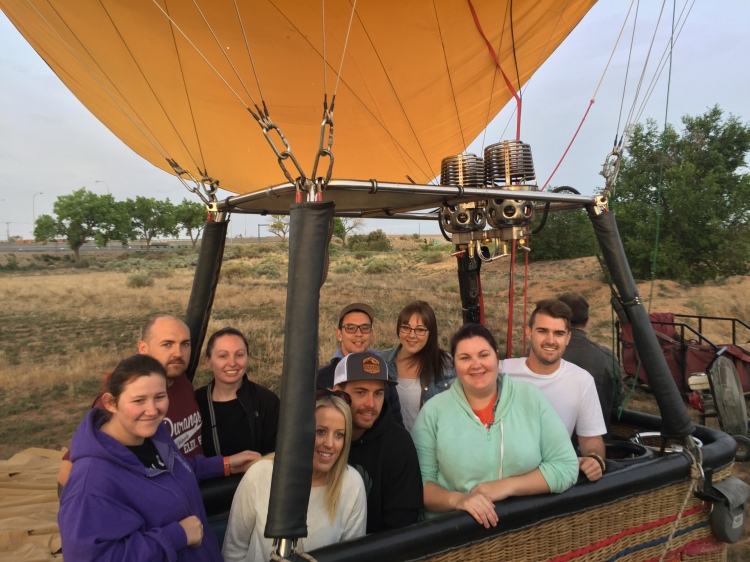 The van picked us up from the hotel and we drove about 15 minutes out to a field where the guide began to inflate the balloons. They were fuckin massive. About 10 people can fit into the wicker basket. Soon enough we were in the basket and taking off. This was a really cool feeling, when the balloon was flying low it was absolute bliss.  However, when it was up real high (we got to about 1700ft) it was pretty scary. You begin thinking that literally all that is between you and falling to death is about an inch of woven straw. The views were spectacular as was the sunrise. We ended up floating around in the sky for about an hour before attempting to land. We aimed to land in this field behind a church..which old mate completely overshot. We ended up crash landing on a golf course. The landing was great. As balloons have no shock absorption you have to brace for a solid landing which we did and our basket tipped over and we had to lay there in a tipped over basket for about 5 mins. It was pretty hilarious then we got out onto the fairway and people were cracking golf balls up the course! 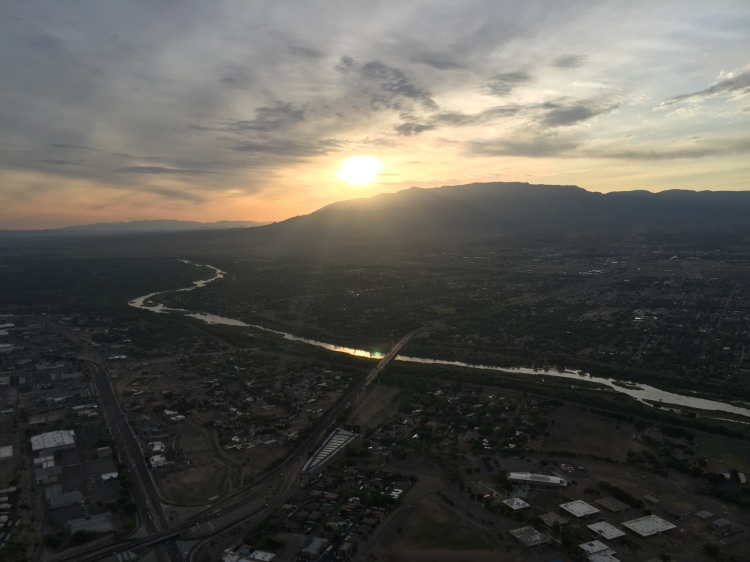 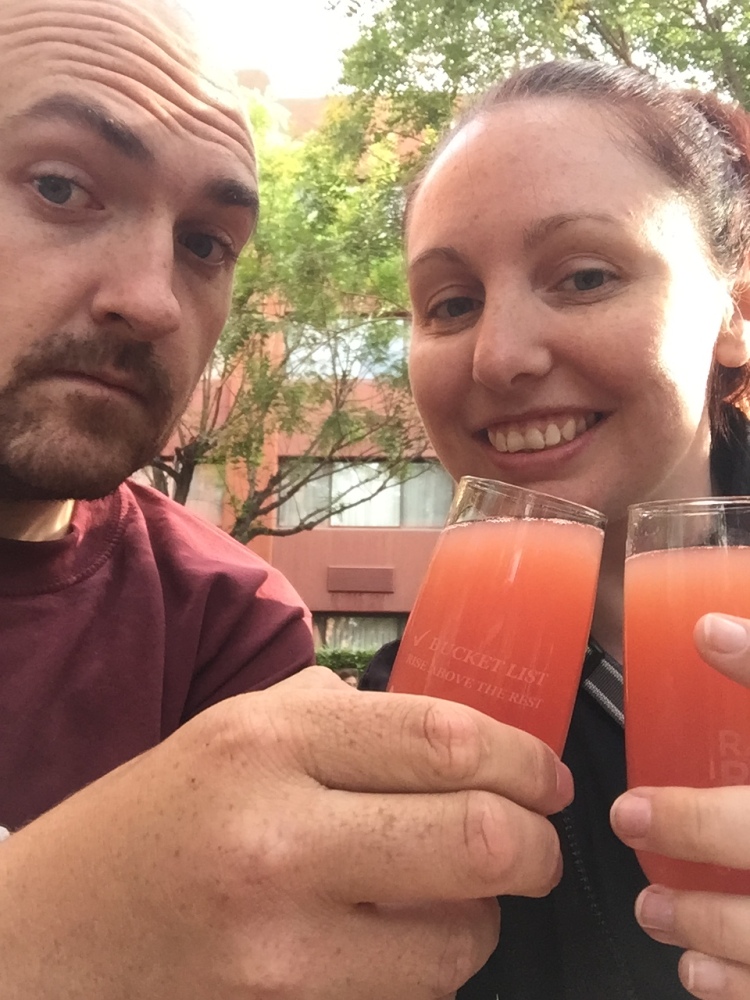 When we got back to the hotel we had a champagne toast plus a little poem which is customary following a balloon flight. This was a really nice experience and one of those things that you have to do at least once in your life. Next, we were on the road again leaving Albuquerque for Amarillo, Texas. I was to be doing a big eating challenge tonight so I was only eating very light small meals. The drive was about 5 hours and we had a stop that had fuckin Popeyes chicken! Something I have wanted to try for a very long time! I couldn’t try it due to my light eating. This made me sad. I hope to come to another Popeyes.

We stopped for Lunch in Santa Fe, New Mexico. This town was so cool! It is where George R.R.Martin lives. All of the house are built it using spanish architecture. We walked around and had a look and then we grabbed a tamale and some fajitas from a food cart that our tour manager recommended. They were absolutely delicious.  $5 for a full fajita and it was just so delicious. After exploring Santa Fe, we were back on the road until we arrive into our 6th state in USA – Texas. The town we were staying at is at the top of the state. It’s called Amarillo. 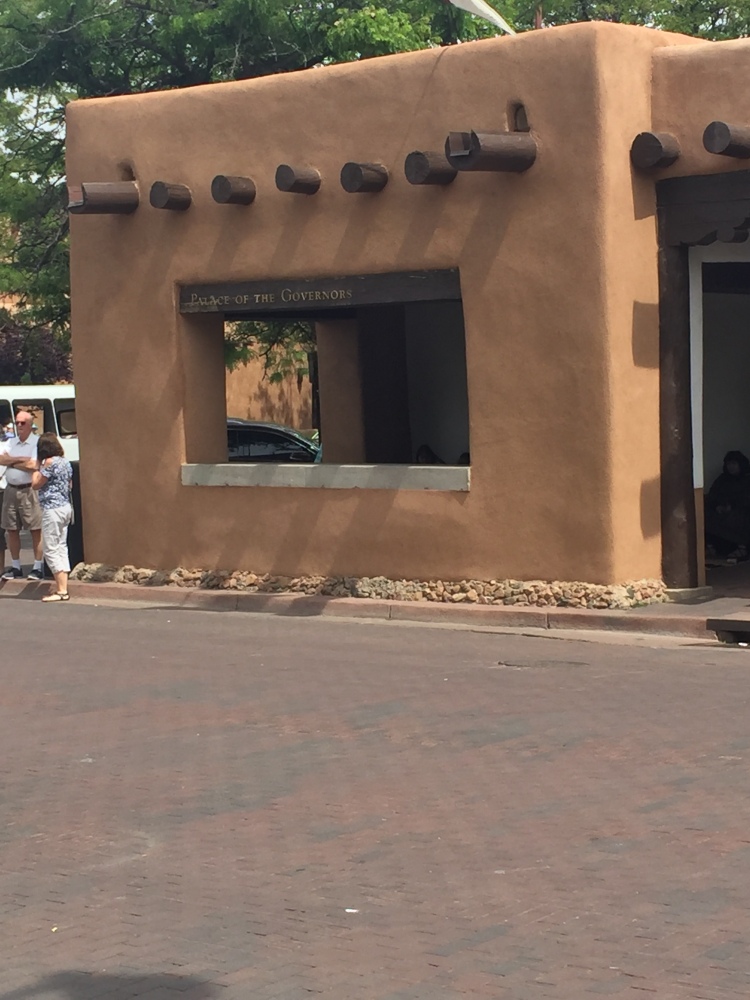 We pulled up at the hotel at Amarillo which is old country and western themed. The pool was in the shape of the state of Texas and it had a horse hotel where people could tie up their horses. It was pretty cool, it was directly across the parking lot from The Big Texan Steakhouse which is a massive restaurant and bar and would be our venue for the night. We got ready and rolled into the restaurant. They had a shitload of tables and one table that was above all other on a stage. This table was for me and 2 of my Contiki familia, Breno and Danielle. As we got up there they put the challenge in front of us. It was a bread roll, a large baked potato, a garden salad, 3 crumbed prawns  and the granddaddy of all steaks which was a 2.3kg sirloin steak that was about as big as my head. It was enormous. My heart sunk in this moment. I had talked this up for months and then when it was presented in front of me, I was intimidated, I had already lost the battle. 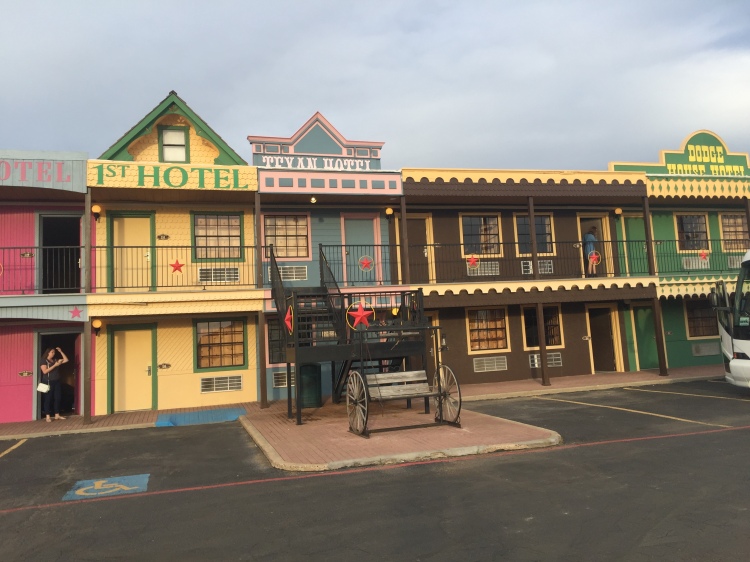 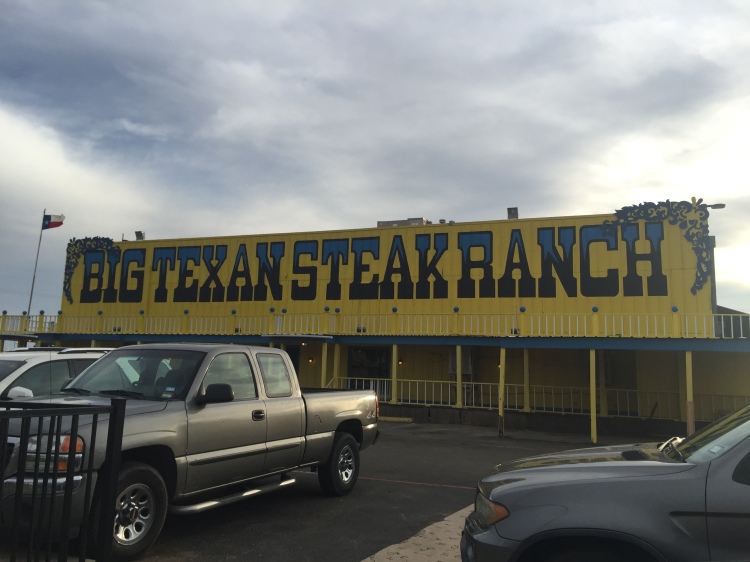 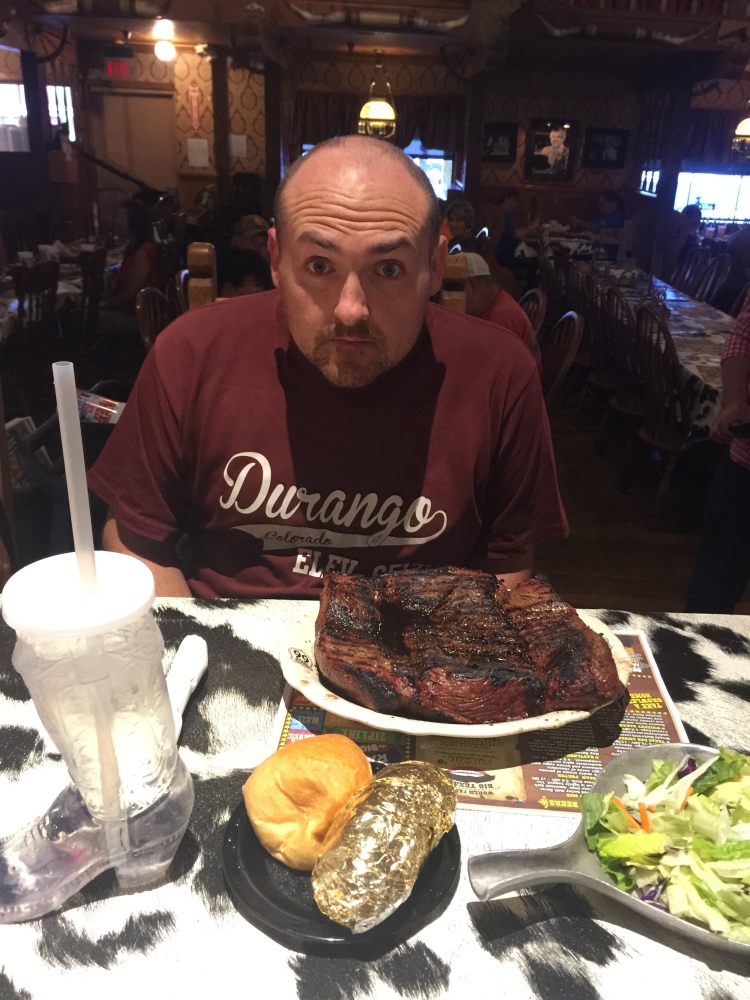 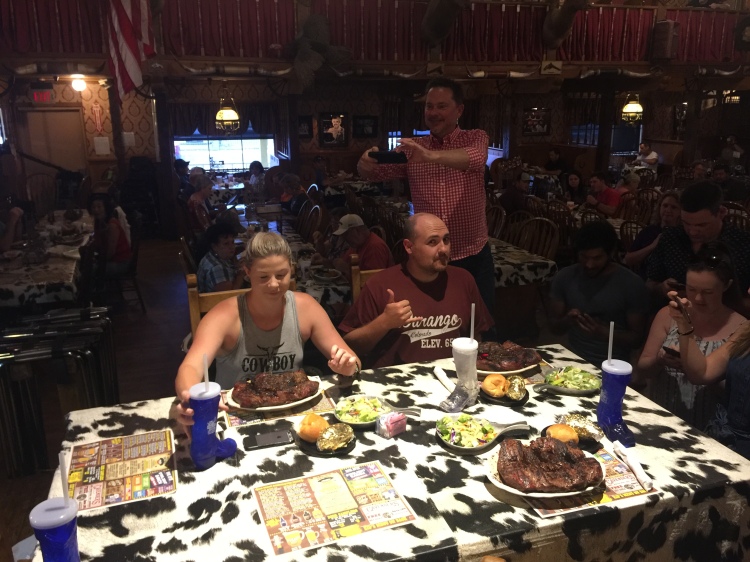 The announcer told everyone what was happening, there was a huge cheer and we kicked it off. My first bite was incredibly dry. I was chewing for ages, I thought I was going to throw up – this was already not looking good. I powered through it with a sip of water and soldiered on. I got into a rhythm, I was smashing steak at an unbelievable rate. I thought at this moment that there may be a chance that I could do this..this thought was short lived. I got about halfway through the steak and I hit that wall. It was a mighty wall indeed. This wall rivalled the one in game of thrones. Every bite from then on was agony. I think the main contributing factor at this point was that by now I was absolutely hating. the taste of steak at this point. I was gagging on every bit of juice. I was trying everything I could to get it down, adding sauces, chasing it with drinks, mixing with salad but nothing was working. At this point, I knew I was done with steak. I looked at at Breno, he hadn’t touched the sides but was well ahead on the steak, he had resorted to picking it up with his hands and biting chunks. Danielle had cut her steak up into pieces but all three of us were visibly struggling. We made eye contact and all three of us silently acknowledged that we were fucked. I didn’t want to look completely shit so I forced myself to get through all of the sides, which I did. There was a loud cheer during the last minute and I almost puked a few times, but it was over, we were defeated. The Contiki family said they were proud and it was a good effort. We were awarded with a T shirt and a souvenir cup shaped like a boot for our effort. Usually we would have to pay $72 for failing the challenge, however, the Contiki family all chipped in $5 and paid for all three of our meals. Lovely people. 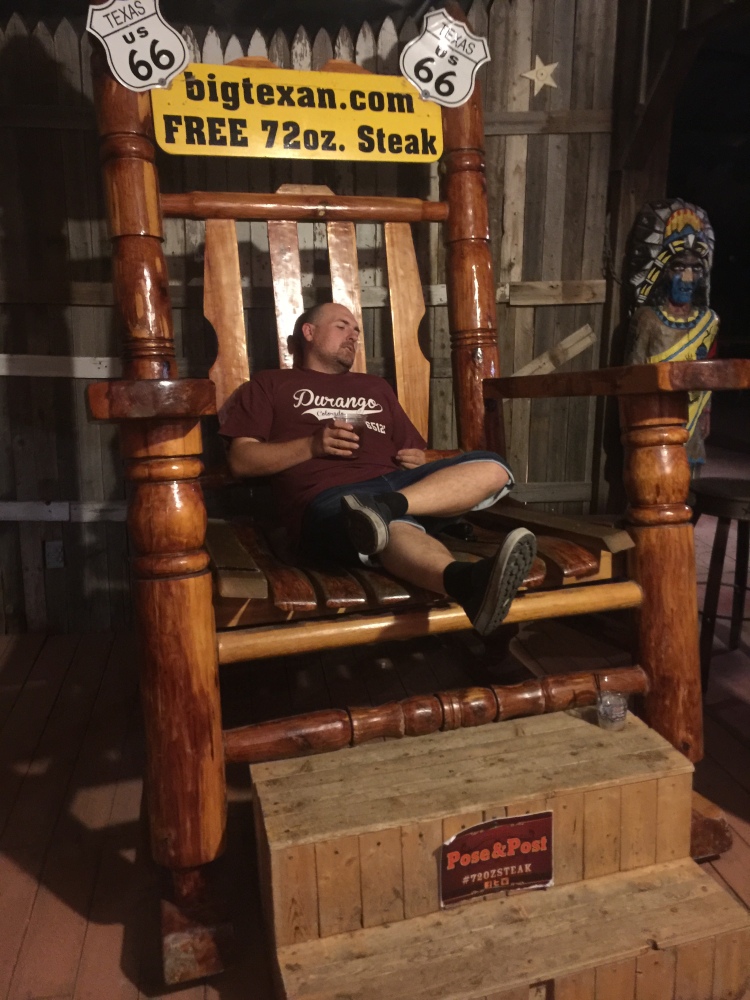 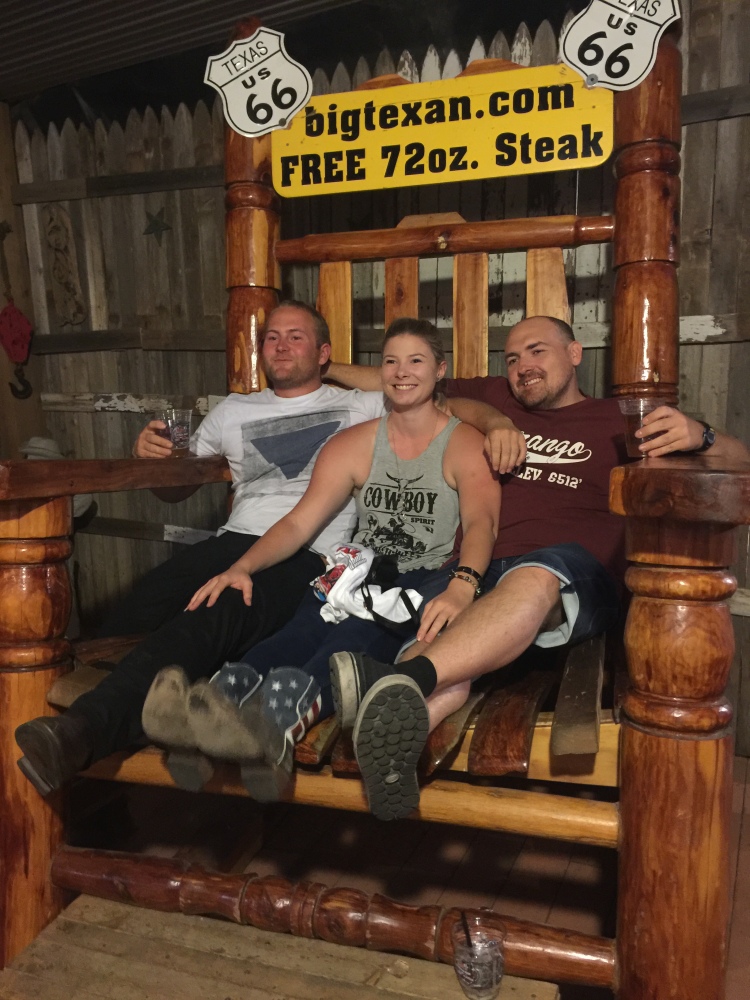 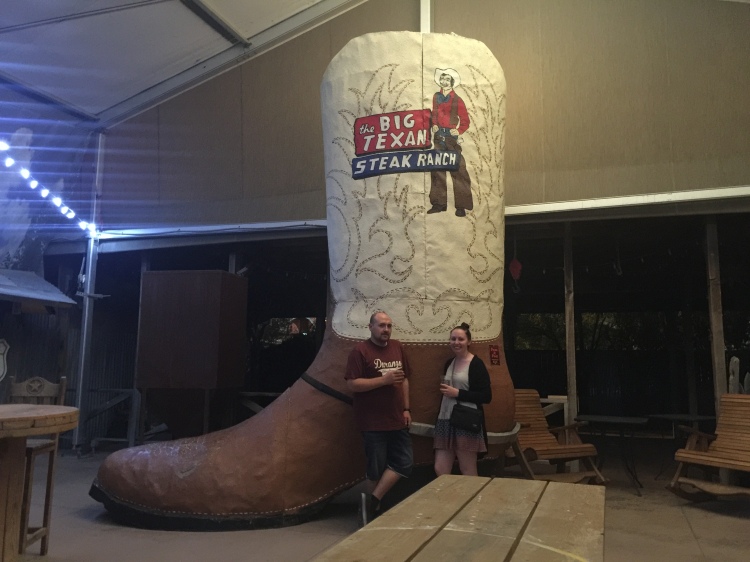 Braden gave us a free beer voucher which I used but couldn’t get something as heavy as beer down. All three of us went into the bathroom for a tactical vomit so we could continue the night and enjoy it. Aimee and I got a margarita which was delicious and hung out in the beer garden which was an absolute quality area. I even got the energy and was feeling well enough to join in on the line dancing. I was pretty terrible but it was good fun! Amarillo did not disappoint. We got home at about 11PM and did a bit of laundry and hit the hay.

Tomorrow we are driving to Fort Worth, Texas.

Spent the last few days at Thredbo. We are not suited to the snow, but we are down for trying anything at least once! #nswtravel #twomindstravelalike #sorefeet #snow #thredbo #snowboarding #noobs #findusatthebar
Throwback Thursday to a beautiful night spent in Florence, Italy. A delicious (and generous) helping of Florentine Steak and a wander through the old streets of Florence where we listened to classical music and gazed upon Leonardo Da’Vinci’s art projected onto stunningly beautiful 13th century Palazzo Vecchio tower. One of the greatest nights of our lives. It is only 2 weeks until our next adventure! Stay tuned! #tbt #italy #florence #davinci #twomindstravelalike #bestnightofourlife #wanderlust #travel #travelcouples
Throwback Thursday to our time in Vietnam. We were in Vietnam 6 years ago today. What we wouldn’t give to be back in Ha long Bay with a cold bababa in one hand and a banh mi on the other watching the sun set over the incredible limestone formations. #tbt #travel #vietnam #halongbay #wanderlust #twomindstravelalike #adventure #livingourbestlifetogether
Throwback Thursday to our time at the Albaicin in Granada, Spain. We embarked on a morning walking tour through this beautiful historic district. Quiet twisted walkways with beautiful old building from ages past. It’s a surreal feeling walking through there which ends with an unbelievable view of the Alhambra. Stunning. #tbt #spain #twomindstravelalike #travel #wanderlust #beauty #albaicin #Granada #hellomuddahhellofaddah #travelphotography
Throwback Thursday to the time we were in one of our favourite places in the world - Las Vegas. From The neon lights to the glamorous casinos and the never ending flow of interesting characters. We miss the glitz and glamour of Vegas and can’t wait to get back there some day. #tbt #twomindstravelalike #wanderlust #lasvegas #nevada #sincity #stunning #travel #usa
Thinking about beautiful Hoi An on the central coast of Vietnam. It is a stunning beautiful town and provides the best of old world Vietnam. We spent a few night here in 2014 and we still agree to this day that it is one of our favourite places in the world. #throwbackthursday #tbt #vietnam #hoian #travel #canals #wanderlust #2014 #takemeback #beauty #goodfood #goodmemories #goodtimes #twomindstravelalike
Loading Comments...
Comment
×
%d bloggers like this: