This morning we woke up at at 6am as we had to be ready and on the coach by 7:15 that was to depart to the nearby helipad for our helicopter trip over the Grand Canyon. We had the choice to either do the a 25 minute flight or a 50 minute flight that went over the the entire Grand Canyon. Naturally, we went for the longer flight.

We had to wait at the helipad for a while. By the time we got on the helicopter we were both feeling pretty rough because we’d had a rotten short sleep and our room was way too hot for a comfortable sleep so instead I stayed up for a bit and watched Jurassic park and planet of the  apes on AMC. As far as American tv goes, they have some pretty decent channels. AMC is probably my favourite that they have had in most of the hotels so far. To go with the good channels though, there are a multitude of absolute dogshit channels. Most of them featuring infomercials or dickheads preaching the bible trying to get you to send in donations. Also we didn’t get a chance for breakfast. So we got on the flight and I was sitting in the middle so I didn’t have the best view and was next to this fat American dickhead who was heaps stinky. The views were absolutely stunning and it was my first time in a helicopter so it was pretty amazing. However, it was hindered by the way I was feeling at this point. It was about a 6/10 I’d say. 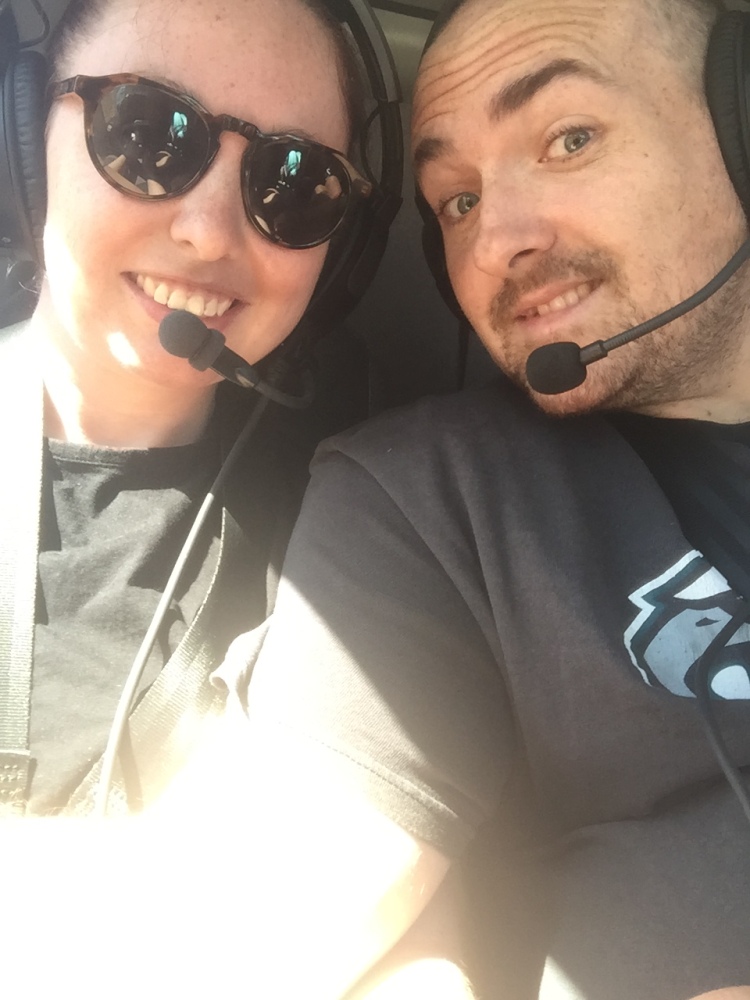 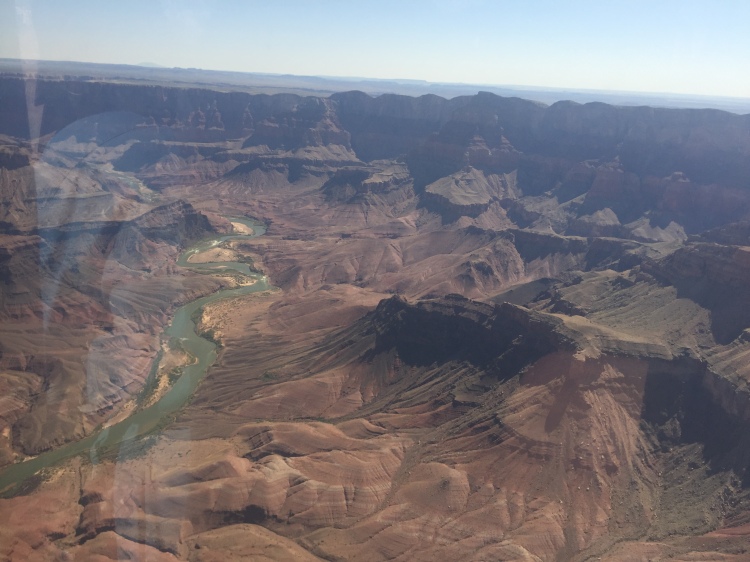 We got back to the lodge and rolled down to the cafeteria for lunch, we had a pizza and salad which was pretty substandard. Then we came back to the room for a bit of a rest. We then had the bike tour. Aimee and I walked up to the visitors centre to meet up with the rest of our group of 12 and met the tour guides. They were really good. The bike tour went for 2 hours and we rode heaps of the rim of the Grand Canyon and stopped at different parts to have a look, hear some stories and take photos. It was really good. Aimee reckons it’s the best thing we have done yet. It was just a really good fun time. It felt great to get some exercise in too.

After that we came back to the room again for a lay down. We were meeting the whole group at 6:15 for a picnic at Hopi point to watch the sunset over the Grand Canyon. It was really beautiful and a nice time. Watching the sun set over the Canyon is just one of them moments that you never forget. We had a few drinks and ate a sandwich at the picnic. We actually bought a heap of food for the picnic but barely got around to eating any of it. Our bus driver Alex had an absolutely massive bottle of fireball and was pouring shots directly into everyone’s mouths haha that was pretty good. On tour manager Braden gave this really nice speech and poured us all a drink from a goon bag he bought and we toasted over the sunset. 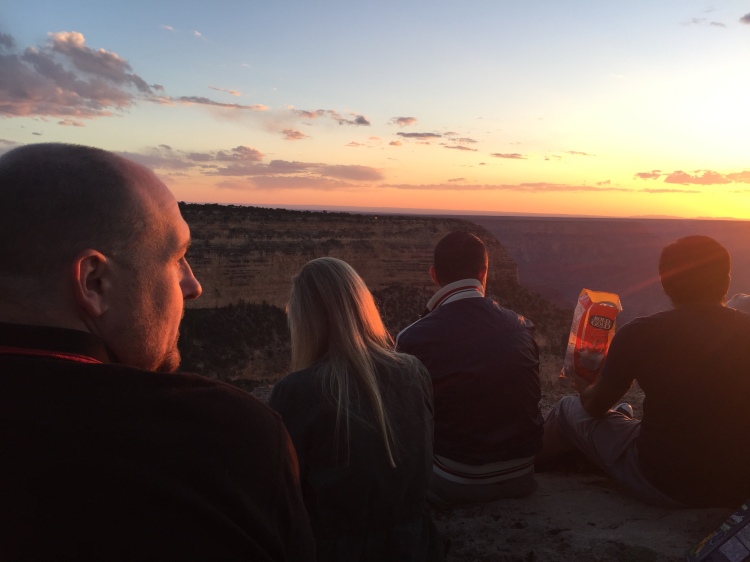 After that we went home for an early night as we have to be up and at the coach by 7:15 for a long drive day to Durango, Colorado. All up the Grand Canyon was a really different experience too Las Vegas, a stark contrast really. In Vegas you can’t see the stars at night due to so much light pollution. However, in the Grand Canyon, the stars are extremely visible. It was nice to be out in nature as well. One thing we noticed is that there are a lot of Elk that hang around very close to people. They are massive creatures and there are a lot of them here. Our bike tour guide told us that the Elk hang around humans because the mountain lions are scared of humans and the Elk are scared of mountain lions. I thought that was an interesting tidbit.

I know this is a short blog post and not the best one but I’m so tired right now and need some sleep badly. I will keep you all updated about our long road trip tomorrow with many stops.

Spent the last few days at Thredbo. We are not suited to the snow, but we are down for trying anything at least once! #nswtravel #twomindstravelalike #sorefeet #snow #thredbo #snowboarding #noobs #findusatthebar
Throwback Thursday to a beautiful night spent in Florence, Italy. A delicious (and generous) helping of Florentine Steak and a wander through the old streets of Florence where we listened to classical music and gazed upon Leonardo Da’Vinci’s art projected onto stunningly beautiful 13th century Palazzo Vecchio tower. One of the greatest nights of our lives. It is only 2 weeks until our next adventure! Stay tuned! #tbt #italy #florence #davinci #twomindstravelalike #bestnightofourlife #wanderlust #travel #travelcouples
Throwback Thursday to our time in Vietnam. We were in Vietnam 6 years ago today. What we wouldn’t give to be back in Ha long Bay with a cold bababa in one hand and a banh mi on the other watching the sun set over the incredible limestone formations. #tbt #travel #vietnam #halongbay #wanderlust #twomindstravelalike #adventure #livingourbestlifetogether
Throwback Thursday to our time at the Albaicin in Granada, Spain. We embarked on a morning walking tour through this beautiful historic district. Quiet twisted walkways with beautiful old building from ages past. It’s a surreal feeling walking through there which ends with an unbelievable view of the Alhambra. Stunning. #tbt #spain #twomindstravelalike #travel #wanderlust #beauty #albaicin #Granada #hellomuddahhellofaddah #travelphotography
Throwback Thursday to the time we were in one of our favourite places in the world - Las Vegas. From The neon lights to the glamorous casinos and the never ending flow of interesting characters. We miss the glitz and glamour of Vegas and can’t wait to get back there some day. #tbt #twomindstravelalike #wanderlust #lasvegas #nevada #sincity #stunning #travel #usa
Thinking about beautiful Hoi An on the central coast of Vietnam. It is a stunning beautiful town and provides the best of old world Vietnam. We spent a few night here in 2014 and we still agree to this day that it is one of our favourite places in the world. #throwbackthursday #tbt #vietnam #hoian #travel #canals #wanderlust #2014 #takemeback #beauty #goodfood #goodmemories #goodtimes #twomindstravelalike
Loading Comments...
Comment
×
%d bloggers like this: