“Nobody controls me. I’m uncontrollable, the only one who can control me is me, and that’s just barely possible” – John Lennon

Vegas could honestly not be any better. We can honestly say that the last 2 days/nights in Vegas have been some of the best of our entire lives. It has without a doubt been absolutely magnificent. We kicked Vegas’ arse and in return, it kicked ours!

This morning started off with an amazing buffet breakfast at our hotel. It was filled with all the delicious shit you could think of for breakfast. We had our first American ‘biscuit’ which is kind of a cross between a bun and a scone. It was delicious. Right after breakfast we went over to the mob museum. This is a museum that is dedicated to organised crime and the mafia that has operated in America throughout the last century.

It was top quality. They had a part of the actual brick wall from Al Capone’s St. Valentine’s Day massacre. There were bullet holes and blood still in the wall which was awesome to see. We loved the mob museum it was really interesting.

Following the mob museum we walked down to a place called the container park. It is a shopping precinct that is made up of shipping containers that have been renovated into a series of restaurants, stores and bars. It was really nice. Out the front of the container park they have a giant praying mantis sculpture that breathes fire.

It was now lunchtime so we walked up Fremont street looking for somewhere to eat. We walked past a place called ‘heart attack grill’ it prides itself on being extremely unhealthy. They have a giant scale you can weigh yourself on before you enter. If you are over 350 pounds, you eat free. Obviously and luckily for us our weights were nowhere near that. We didn’t want anything that hectic but Ronnie weighed himself and it turns out he has actually lost 5kgs since being here. We feel like it might not be true and they make the scales a bit lower to rip off the fatties who just make the 350 mark. We actually ended up at an Denny’s which is an American staple. It turned out pretty good. Loaded tater tots – Yum.

Then we geared up for the Slotzilla. Slotzilla is a zip line that flies 30 metres over Fremont street. We met up with two kiwi sisters on our tour and walked in. They put the gear on us and then we went up an elevator that took us 5 stories up. They then make you lay on a mat and drop the floor out from beneath you. At this point you’re dangling in the air, then they lower the door and you can see everything beneath you, it’s terrifying. Four people go at a time so we all went at once. You launch yourself using your hands when they say go and it’s about 30 seconds of euphoria, flying four blocks above hundreds of people and stores. We loved it, was so fun! We got pics at the end and then had to go get ready for our show. We prepared and the rolled onto the coach with everyone. 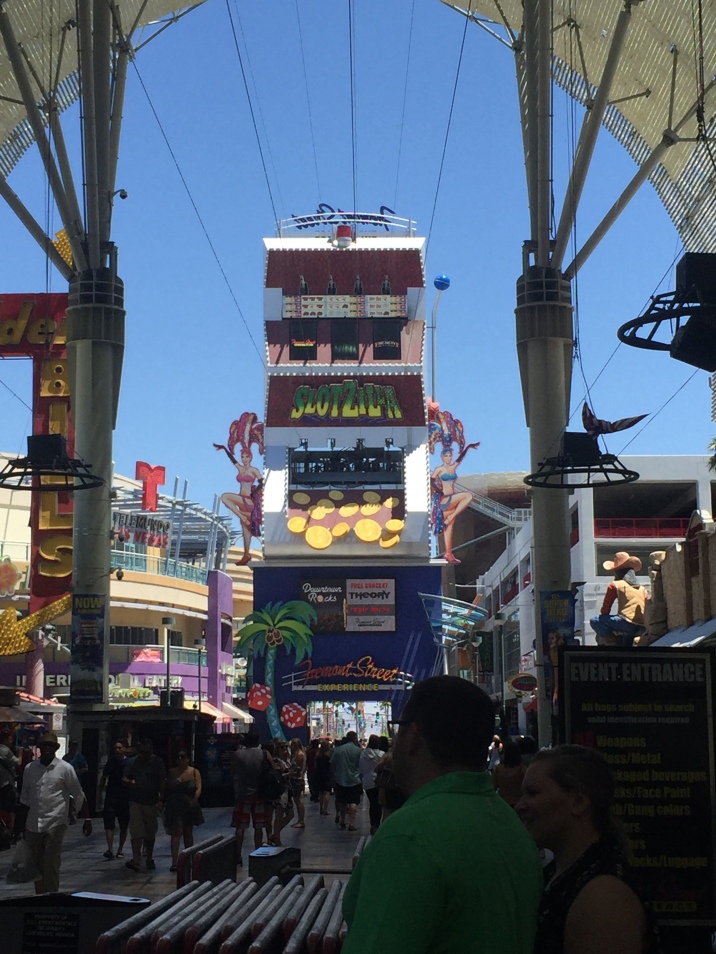 We rolled over to The Mirage in preparation of tonight’s show. The show tonight was Cirque Du Soleil’s ‘LOVE’. 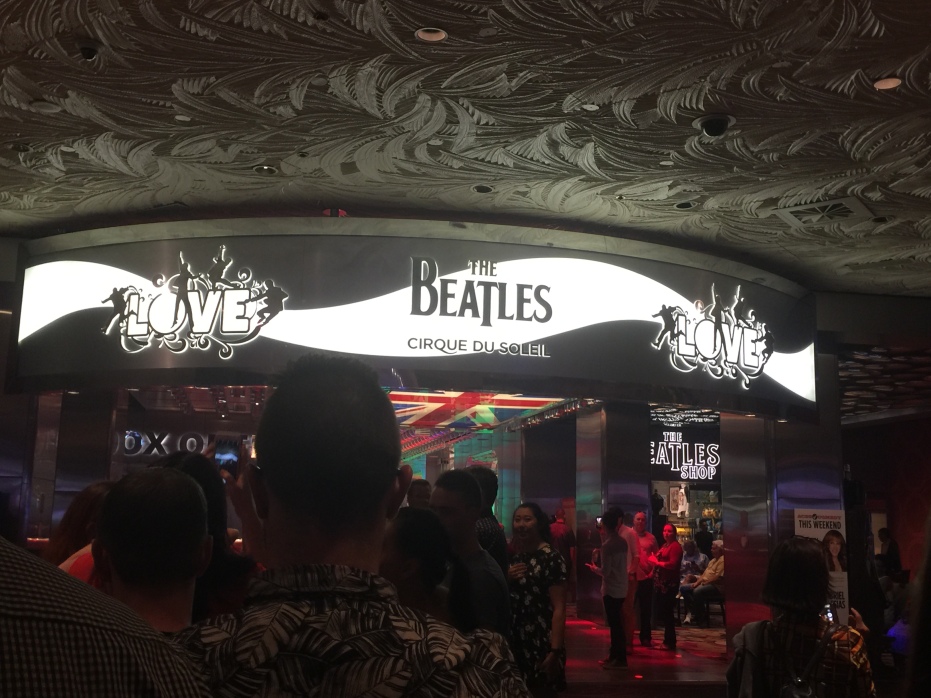 It was a performance based on the music of the Beatles. This show was one of the greatest moments of our life. We sat there for the whole 90 minutes in absolute awe. Ronnie described getting chills, and being in tears, we were having such a good time and we were so happy me and the show just exemplified that. It was an absolute 10/10. If you are ever, I mean ever in Vegas. Add see a cirque du Soleil show in Vegas on your bucket list. Stunning. Words do not even do it justice. 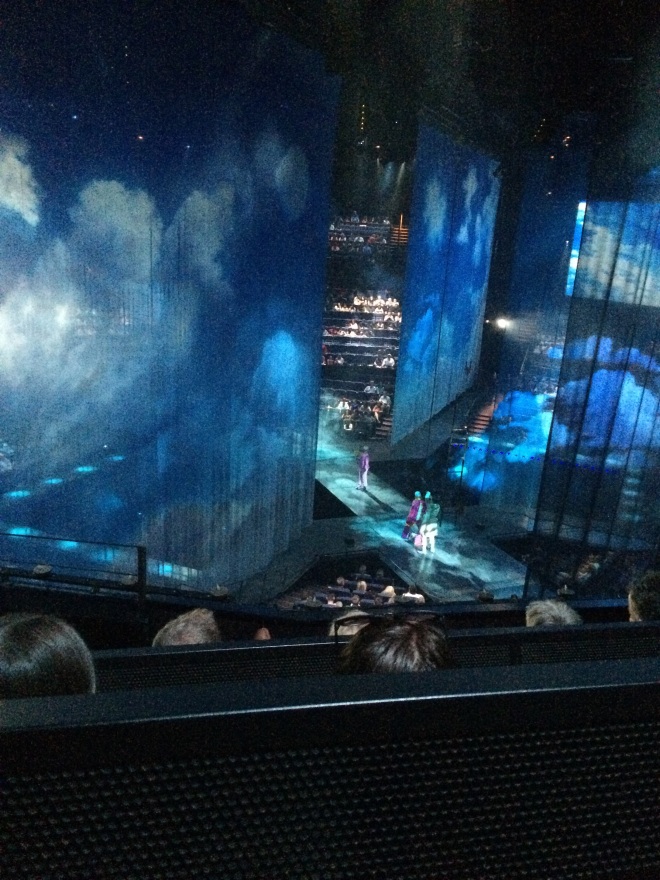 After this we went and had dinner at a burger restaurant at The Mirage. It was called LVB. We are not sure what it stands for but Ronnie had a buffalo chicken burger and Aimee had a beef burger. Both of us agreed they were one of the best burgers we have ever eaten. Then we met up with the rest of the group at the theatre to hit the party bus. Because our group is so large we needed two party busses. These things are absolutely awesome. They seat about 20 people, they have a stripper pole and it’s like a nightclub/bus/limo. We felt 21 again. We were smashing tequila and passing around bottles of vodka to take swigs of while we drove down the strip. This lasted about an hour and was so fun. 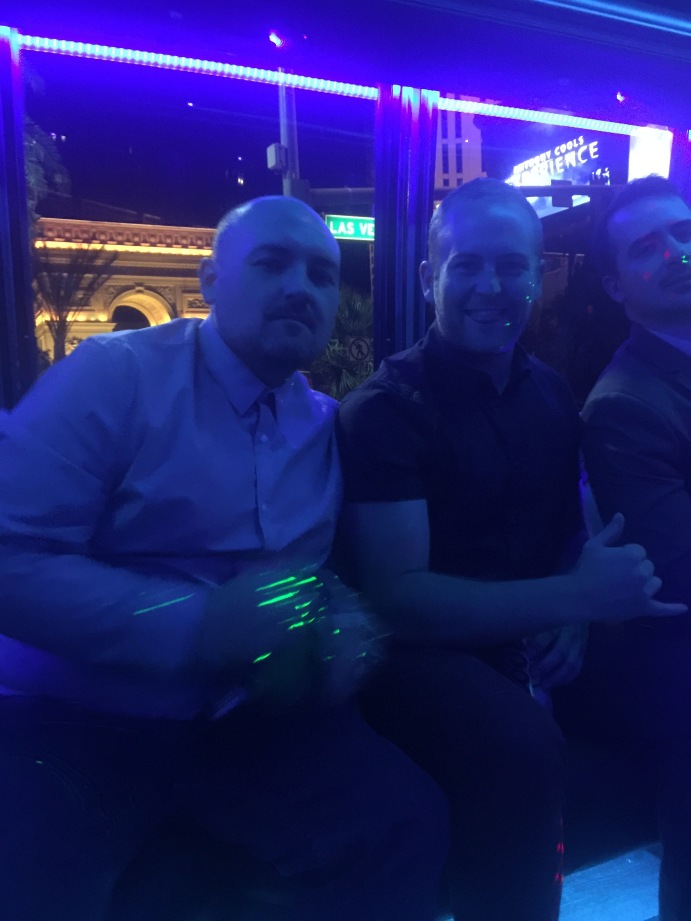 A lot of the group were going to another nightclub called ‘Ghost Bar’ at the Palms Casino. We did not want to go to another nightclub again tonight so we caught an Uber back to the Linq promenade to go on the high roller. The high roller is the largest Ferris wheel in the world. It goes 550ft above Las Vegas inside these capsule type things that hold up to 40 people.

One of them even has an open bar in it. Our capsule had about 6 people inside. It was terrifying but also beautiful. We enjoyed the view and struck up a conversation with an American couple from Chicago who come to Vegas every year for Memorial Day weekend. They were really nice. The woman, Nicole, said that she loved Ronnie’s accent and could listen to him talk all day and night.

After the highroller, we walked around the Linq promenade and we got a cupcake from the cupcake ATM which was a cute little way to buy cupcakes. 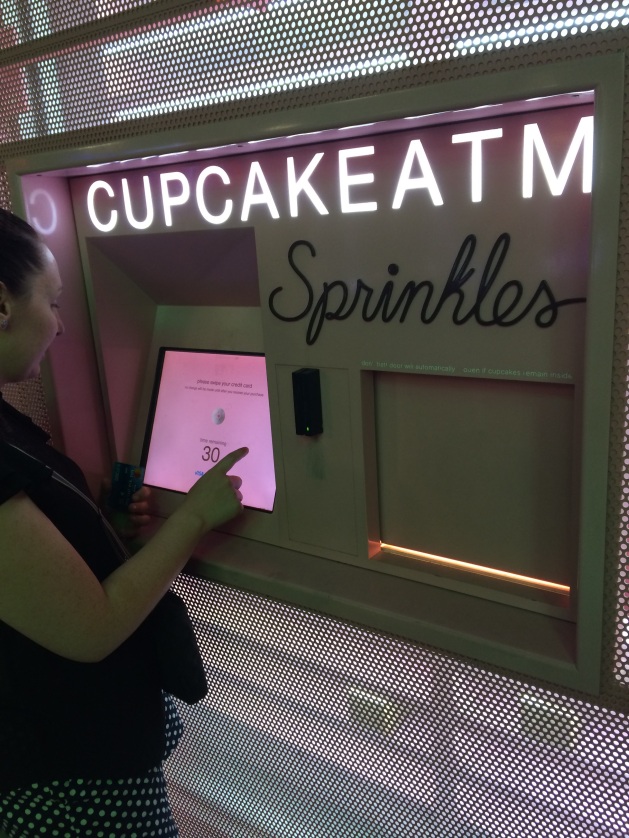 At this point it was 1am and time to return to the hotel via Uber of course. The Uber driver picked us up in this awesome car and told us that he had a loaded gun in the car – it wasn’t creepy or anything cause he was cool but it was different and you wouldn’t get that in Australia.  Vegas has been an absolute blast. Memories that will last a lifetime.