So last night’s sleep was yet again brief. We had anticipated this as we knew we had to wake up early to travel from Anaheim to Hollywood to arrive before 9. What I did not anticipate was to wake up feeling like I did – absolute shit. Sorest throat and very heavy head. I think it is a combination of lack of sleep, being run down plus being around about a million people but I have definitely come down with something.

Several cold &flu tablets later and we were taking our first Uber ride! Another oversight on our behalf, what we anticipated to be a 45 minute Uber ride became a 2 hour ride through immense bumper-to-bumper California traffic! Lucky we left early! Our driver was super nice even though he was a steelers fan. I like Uber way more than cabs. We’ll be using it a lot here. We arrived at our hotel ‘The Hilton: Universal City’, dropped our bags and jumped on the shuttle to universal studios.

We pre-purchased the VIP tickets for universal studios – there is no other way to do it. Our ticket comes with a dedicated guide, included breakfast and lunch, ability to walk around the sets as well as no waiting on any rides. We arrived at 9:15 on the dot which meant we were too late for breakfast. We met our guide just as the group were walking out the door. Her name was Donna and she was fucking spectacular. Our tour group had 12 people, 2 filthy Giants fans from NY, but they were nice. 4 Americans we didn’t really speak to. 2 other Aussies who were fuckin weird as shit, giving Aussies a bad name abroad – they both looked and acted like crazy cat ladies. Lastly, two hilarious African Americans from Maryland, mother and son (even though he looked older than her). These two were pretty big stereotypes, they got excited about everything and were honestly just having so much fun – being around them made me smile.

So our tour kicked off and you really do feel like a VIP, we did the studio tour which was cool, then we went in our first set of rides – Jurassic Park, Transformers and The Mummy. The mummy ride was incredible. So so so good. Following these rides we rolled to a middle class buffet style lunch that only VIP’s could get. The food was great but honestly by this point I was feeling really sick and had a sore throat so I couldn’t enjoy it to the fullest capacity, Aimee loved it though! While we were eating characters came up and interacted with us, Dracula and Doc Brown. Quality interactions.

Following this we went to the Waterworld show (based of the Kevin Costner film) which had some great special effects and was fun. As VIP’s we got a Q and A with the actors afterwards which was a nice touch. Then we went on the minions ride which was fun and then moved to the walking dead attraction. At this attraction, you walk through several scenes and dark hallways and there are actors in there scaring the cunt out of you at every turn. The stagecraft and makeup was absolute quality, they don’t touch you but they get right up in your personal space, Aimee was screaming the whole time hahaha. After this was the main event – The Wizarding world of Harry Potter. 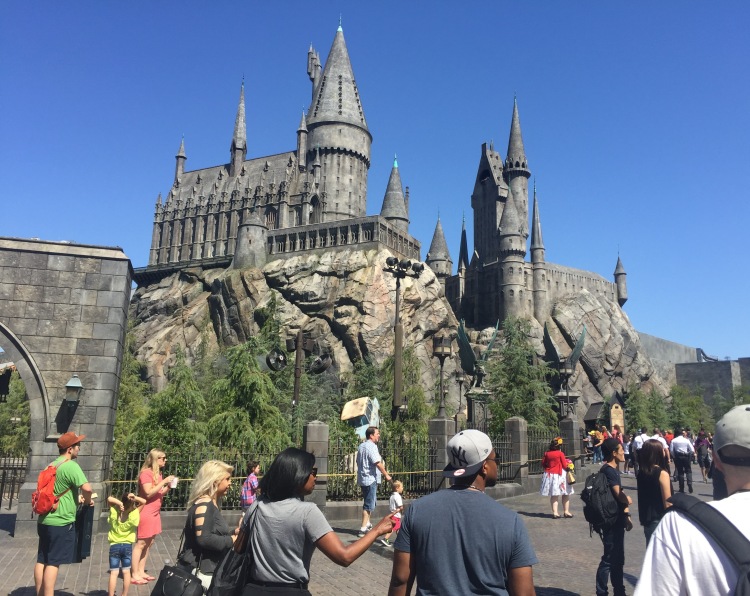 This ares of the park is absolutely spectacular. It feels like you’re actual at Hogsmeade and the hogwarts castle is grand and spectacular. We went to the Flight of the Hippogriff ride which was a little fun rollercoaster and then we went on the big ride – Harry Potter and the forbidden journey. Honestly, this is probably the greatest ride of have ever been in. It is so thrilling and is so well done and is such an immersive experience, just wow. If you’re ever here – do it. Incredible.

By this point I was feeling like dogshit. It was really hot and my head and body was just not coping. At this point Donna left us which was sad, Aimee wanted to tip her $50 USD she was that good, but she said goodbye and took off before could give her a tip at all. We haven’t fully worked out tipping yet, we have done it a few times but still learning!

We had a few hours left to explore the park off the tour, we grabbed a butter beer which was so sweet but fuckin delicious and then we went over to The Simpsons area of the park which is really cool. Prior to the trip I really wanted a Krusty Burger and a Homer Donut and a Flaming Moe’s. I didn’t get any of them because I still felt so sick and couldn’t stomach anything. I bought a couple of Simpsons shirts from the Kwik-e-Mart and then we hit the Simpsons ride which was pretty good and then we left the park. On the way out we went to this shop dedicated to socks that was called ‘Los Angeles Sock Market’ this place was cool. I bought some awesome Eagles socks (of course!).

After this we went back to the hotel, I bought some lozenges from the convenience store located within the hotel and checked in. As soon as I got in the room, I had a shower and went to sleep (5pm). I woke up at 10 and began writing this post! The hotel is really beautiful. I am feeling a bit better after the sleep but still no good. We were going to get room service for dinner but I still can’t stomach any food. I am about to pop some night time cold and flu pills and hopefully get a decent nights sleep.

Thanks for reading guys – on tomorrow’s agenda is Hollywood walk of fame, Santa Monica pier, Venice beach, meeting our Contiki family and Griffith observatory. See you on the other side!